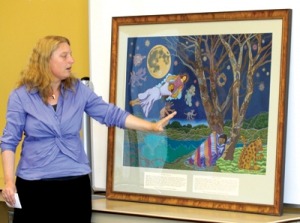 A new oil pastel painting, “The Mystery at Pinto Lake,” was unveiled Monday at Watsonville Public Library on Main Street.

The 3-foot-by-4-foot framed work, painted by Watsonville artist Heidi Alonzo, will eventually hang on the first floor of the library behind the main circulation desk, library director Carol Heitzig said.

The work was commissioned by local developer George Ow Jr.

The work is a colorful, highly stylized visual recounting of a story that began on June 17, 1992, at Pinto Lake County Park where Anita Mendoza-Contreras, a local resident, noticed what appeared to be an image of the outline typically used for the Virgin of Guadalupe appearing in the bark of an oak tree. The apparition has grown to be a major attraction, especially for many Central Coast residents who are from Mexico, where the Virgin Guadalupe is significant to the Catholic religion. Even today, a shrine filled with candles, hundreds of fresh and plastic flowers, photographs and religious objects marks the spot. Each anniversary of the discovery, hundreds of pilgrims converge at the site to pay honor and pray.

“I love libraries and I love this library,” Ow told a gathering of about 15 people at the unveiling. “I also love Heidi’s painting. Elias (Alonzo’s husband) had written a very lyrical prose/poem about the virgin at Pinto Lake and Heidi brought the words to this painting.”

Heidi Alonzo has been a member of the faculty at St. Francis Central Coast Catholic High School for nine years. In addition to teaching art, she instructs classes on computer design and graphics and serves as yearbook adviser.